Rapido Ochoa is a company that is dedicated to the ground transportation of passengers and shipping and parcel transportation that has been operating since 1958, the year it was founded in the city of Medellín. Rapido Ochoa began covering the route to Barranquilla, gradually adding more destinations in the Southwest Antioquia and the Atlantic Coast such as Sincelejo, Montería, Cartagena, Santa Marta, Valledupar, Riohacha and Maicao Over time, Rapido Ochoa included routes to areas of the interior of the country such as Bogota, Bucaramanga and Pereira, as well as the Pacific Coast, speciallu in Cali and Quibdo, the latter, one of the most frequented given its scarcity in the bus market.In total, Rapido Ochoa offers more than 60 routes nationwide.

Rapido Ochoa works hard to improve its service to provide its customers with a great experience when traveling. Not in vain, Rapido Ochoa has been recognized on a couple of occasions as the company with the best safety and quality indices in the transportation of passengers and cargo in Colombia. In order to achieve and maintain these high standards, Rapido Ochoa has more than 900 employees, each trained in a role to provide the best services. 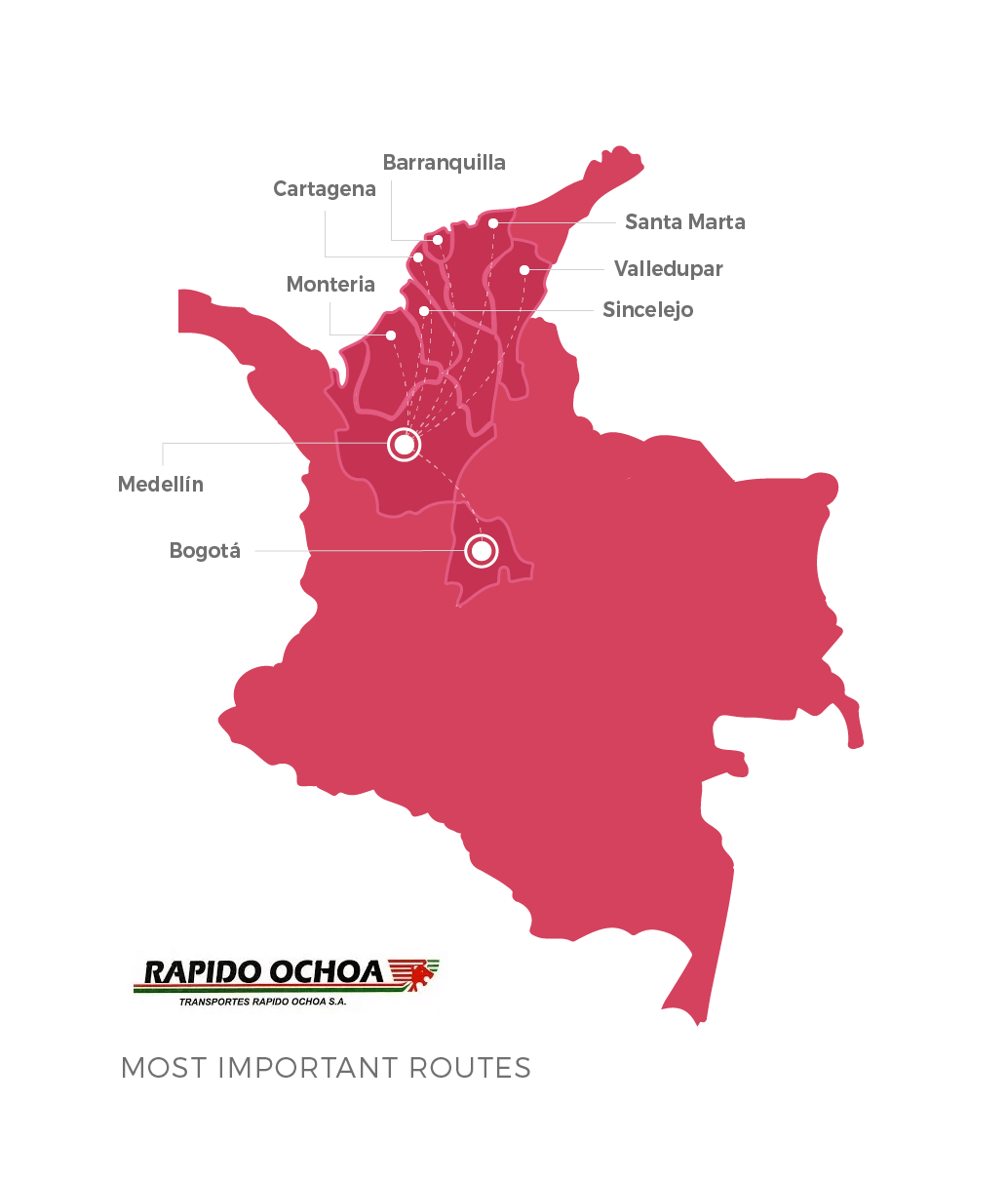 Rapido Ochoa's fleet focuses not only on being very safe when traveling, but on providing various amenities to passengers on each journey. Rapido Ochoa's buses are large capacity in which a user can enjoy air conditioning, foot rests, individual screens, reclining chairs, connectors, WiFi, bathroom and television.

Rapido Ochoa also has the modality of drafts with regulated rates, wide coverage and short delivery times in all the offices and ticket offices of the company. Currently, Rapido Ochoa operates as a banking correspondent for Bancolombia, providing through this alliance the services of deposits, consignments, withdrawals, transfers, balance inquiries, collections and payment of bank products in 18 of the points of sale that Rapido Ochoa has. at the national level.

Rapido Ochoa's onboard services include: Reclining chairs at 120°, reclining chairs, individual screens, TV, Wifi, electrical outlet and bathroom, although the services vary from one model to another.

The various types of buses run by Rápido Ochoa are:

Rapido Ochoa Bus Service On Board

Modifications in Rapido Ochoa do not have a time limit to be requested. Rescheduling can be made up to 30 days after the date of the trip and the penalty for this change is 20% of the value of the ticket.

Q-1). What is Rapido Ochoa's health protocol for dealing with COVID - Coronavirus?
A: Rapido Ochoa officials must wear masks, gloves, and glasses. Passengers must also wear face masks and wear antibacterial when boarding the bus. Vehicles must be disinfected outside and inside before and after each trip.
Q-2). What are Rapido Ochoa's most important destinations?
A: ● Bogota - Caucasia ● Bogota - Lorica ● Bogota - Planeta Rica ● Caicedo - Medellin ● Cartagena - Caucasia ● Cartagena - Corozal ● Cartagena - La Apartada ● Cartagena - San Onofre ● Cartagena - Sincelejo ● Cerete - Medellin
Q-3). I'm going to travel with a child, does she or he needs to have a ticket?
A: If the child is over 3 years old, pay and have a seat.
Q-4). How much luggage can I take with me without paying extra?
A: Please note that your bags must not exceed 15kg in weight or must pay a surplus.
Q-5). I am not going to travel, how can I reschedule my trip or get a refund?
A: Modifications to Rapido Ochoa must be made two hours before the departure of the bus and are valid until 30 days after the date of the trip. The penalty for this change is 20% of the value of the ticket.
Q-6). Does Rapido Ochoa offer discounts or promotions?
A: Currently, Rapido Ochoa does not have a special discount for frequent travelers.
Q-7). Can I request a Private Service at Rápido Ochoa
A: Currently, Rapido Ochoa does not have the option to request a private service.
Q-8). Can I travel with my pet?
A: If your pet travels in a 35cm box in the bus hold, you are welcome at Rapido Ochoa. They must carry the current vaccination card and use a diaper.
Q-9). What is the phone number of the company Rápido Ochoa?
A: The phone number of Rápido Ochoa is (+57) (4) 4448888
Q-10). What's the mail from Rápido Ochoa?
A: The e-mail of Rápido Ochoa is scliente@rapidoochoa.com
Q-11). What is the total number of routes covered by Rápido Ochoa daily?
A: Rápido Ochoa covers 884 routes (approx.) daily.
Q-12). What is the total number of buses that have departures on company nights Rápido Ochoa?
A: There are 349 night bus departures for the company Rápido Ochoa.Should I print my bus ticket before boarding?
Q-13). Should I print my bus ticket before boarding?
A: Yes, you must print it before boarding, remember that all passengers will have to print their bus ticket that was sent to their email in PDF format and then be exchanged for a physical ticket at the counter of the bus company with which you are going to make the trip.
Q-14). Can I buy the ticket in someone else's name?
A: Yes. A person different from the one who is going to travel can buy the tickets online. The important thing is that the passenger's information is recorded in the document to be printed and delivered to the different ticket offices.