Expreso Brasilia is one of the main bus companies in Colombia, having a wide coverage nationwide. Expreso Brasilia was founded in Barranquilla in 1961 with multiple routes in its beginnings in the department of Atlántico and the Caribbean Coast. Over time, Expreso Brasilia's routes expanded throughout the country, exceeding the figure of 1,000 national destinations, covering areas such as Bogotá, Medellín, Cali, the Pacific Coast and the Coffee Axis, among other important regions, as well as reaching to countries like Peru and Venezuela. Expreso Brasilia has a surprising number of 450 buses, plus 60 agencies and 250 points of sale distributed throughout Colombia.

Among the services of Expreso Brasilia, parcels to different regions of the country stand out, with a very fast, safe and effective delivery time. Another outstanding service of Expreso Brasilia is the immediate turns from one city to another, all this withdrawing at the points of sale in the different agencies and shopping centers in the country. Expreso Brasilia has the modality of renting its buses for corporate transport for the transfer of employees and companies in general. Expreso Brasilia also has the Unitransco service with which it has complementary routes to have a much broader coverage.

Expreso Brasilia's Fleet consists mainly of Mercedes Benz and Chevrolet buses with Marcopolo bodywork. All Expreso Brasilia vehicles have a modern communication system between the plant and each of the buses. Expreso Brasilia also has the educational bus, a pioneer in Latin America, which allows drivers to practice their skills, improve their knowledge of traffic signals and have defensive driving and effective driving. The entire Expreso Brasilia fleet constantly goes through techno-mechanical reviews in order to provide a safe, comfortable, friendly, accomplished and modern service. 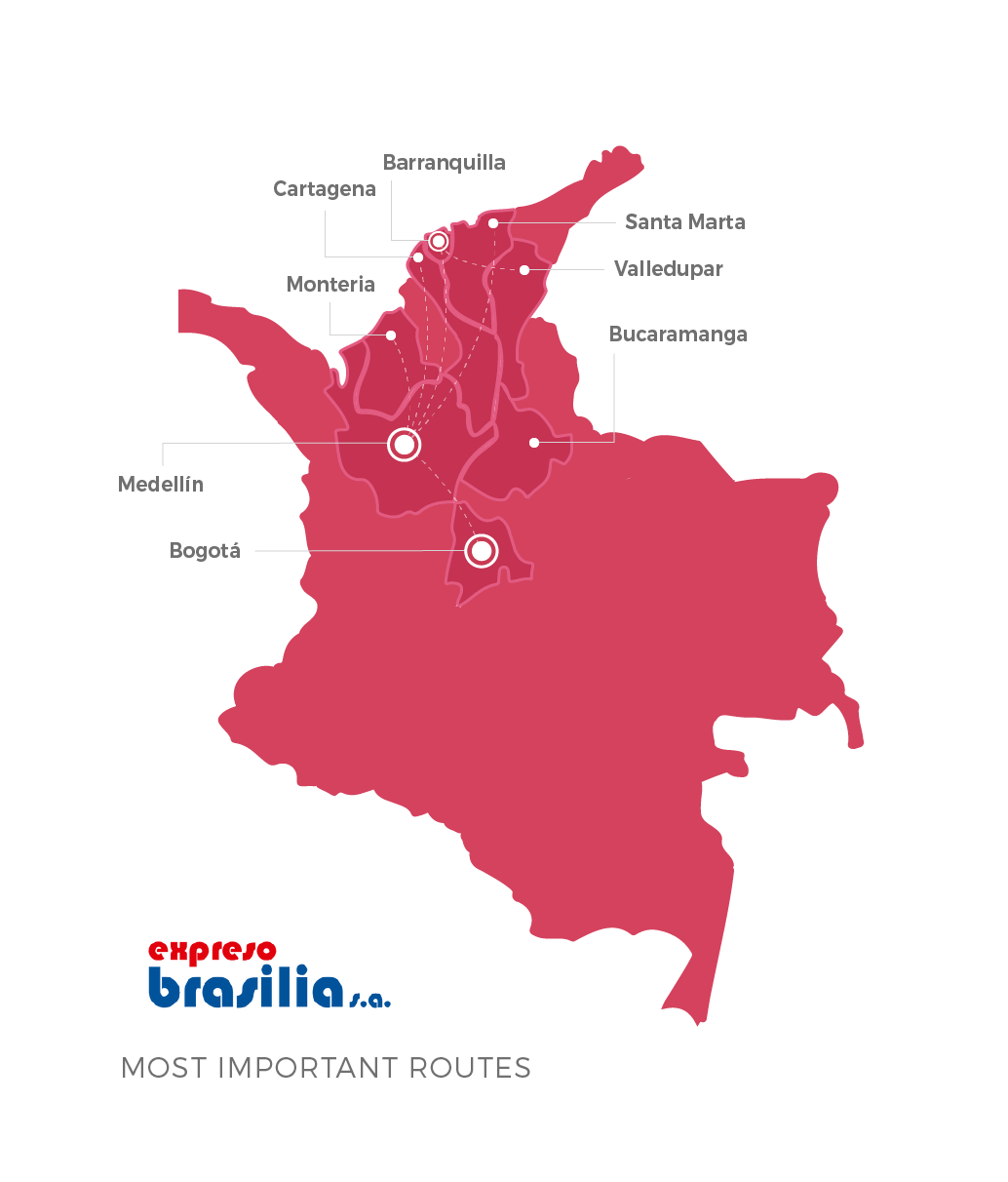 Expreso Brasilia has a strong security policy for the prevention of traffic accidents during trips on the different roads of the country. Its road safety standards in the operational area and in the company's facilities have the clear objective of minimizing vehicular risk, which is why the more than 1,500 Expreso Brasilia employees go through the due process of preparation to overcome any eventuality that may affect both the physical, mental and social integrity of the nearly 4 million passengers who move annually with Expreso Brasilia in addition to the staff on board.

Expreso Brasilia not only stands out for being at the forefront of transportation, but for having an outstanding corporate social responsibility, managing to provide a great economic, social and environmental benefit to be able to contribute to the culture of Barranquilla. For this, the Expreso Brasilia campaign destined for your Heart was created in 2005, with which it seeks to address the health, education and recreation of low-income children and youth in the populations of the Caribbean region. In the case of the benefits for Expreso Brasilia employees, student scholarships, recreational vacations, training and formations, cultural and sports activities, and the Marry with Expreso Brasilia plan to collaborate in staff marriages stand out.

Expreso Brasilia's onboard services include: Snack, Screen and individual headphones, Power outlets, GPS, Wifi and Bathroom, although the services vary from one model to another.

The various types of buses run by Expreso Brasilia are:

Expreso Brasilia Bus Service On Board

Cancellations at Expreso Brasilia must be made within 5 days of purchase or 4 hours before the trip. The company does not make refunds but the client can request reprogramming of the ticket within a maximum period of 6 months. Expreso Brasilia makes refunds on canceled tickets, although a penalty of 15% is charged on the total value of the purchase.

Q: What is Expreso Brasilia's health protocol for dealing with COVID - Coronavirus?
A: Expreso Brasilia reinforced its hygiene and cleaning measures in all its buses, ticket offices and commercial agencies nationwide. Travelers should carry personal hygiene items such as soap, antibacterial, disposable towels, damp cloths and wear face masks throughout the journey. On the screens of the agencies and VIP lounges, all the recommendations issued by the Ministry of Health will be broadcast.
Q: What are Expreso Brasilia's most important destinations?
A: ● Barranquilla - Valledupar ● Valledupar - Barranquilla ● Medellin - Monteria ● Medellin - Bucaramanga ● Barranquilla - Monteria ● Cartagena - Santa Marta ● Medellin - Sincelejo ● Barranquilla - Sincelejo ● Medellin - Caucasia ● Bogota - Medellin
Q: I'm going to travel with a child, does she or he needs to have a ticket?
A: All children over 3 years of age must pay the full fare and occupy a seat on the bus.
Q: How much luggage can I take with me without paying extra?
A: The luggage allowed in Expreso Brasilia is 15kg per passenger inside the bus hold.
Q: I am not going to travel, how can I reschedule my trip or get a refund?
A: Cancellations at Expreso Brasilia must be made within 5 days of purchase or 4 hours before the trip. The company does not make refunds but the client can request reprogramming of the ticket within a maximum period of 6 months. Expreso Brasilia makes refunds on canceled tickets, although a penalty of 15% is charged on the total value of the purchase.
Q: Does Expreso Brasilia offer discounts or promotions?
A: Expreso Brasilia has the Gaviota Traveler program for its Frequent Travelers, where kilometers can be accumulated each time a trip is made with Expreso Brasilia or Unitransco, which can then be redeemed by free tickets and other benefits.
Q: Can I request a Private Service at Expreso Brasilia
A: Currently, Expreso Brasilia does not have the option to request a private service.
Q: Can I travel with my pet?
A: In Expreso Brasilia you can travel with your pet, but keep in mind that it must travel in the hold in a box of no more than 35cm. They must carry the current vaccination card and use a diaper.
Q: What is the phone number of the company Expreso Brasilia?
A: The phone number of Expreso Brasilia is 01 8000 51 8001
Q: What's the mail from Expreso Brasilia?
A: The e-mail of Expreso Brasilia is contactenos@expresobrasilia.com
Q: What is the total number of routes covered by Expreso Brasilia daily?
A: Expreso Brasilia covers 5605 routes (approx.) daily.
Q: What is the total number of buses that have departures on company nights Expreso Brasilia?
A: There are 1249 night bus departures for the company Expreso Brasilia.Should I print my bus ticket before boarding?
Q: Should I print my bus ticket before boarding?
A: Yes, you must print it before boarding, remember that all passengers will have to print their bus ticket that was sent to their email in PDF format and then be exchanged for a physical ticket at the counter of the bus company with which you are going to make the trip.
Q: Can I buy the ticket in someone else's name?
A: Yes. A person different from the one who is going to travel can buy the tickets online. The important thing is that the passenger's information is recorded in the document to be printed and delivered to the different ticket offices.