Wear a mask all the time while you are on the Sotrauraba bus.

Sotrauraba may not be providing you a linen or blanket, so make sure to pack yours during a long trip.

The Sociedad Transportadora de Uraba, Sotrauraba, has been operating continuously since its foundation in 1957 when it was originally baptized under the name of Transportes Sopetran, since at that time Sopetrán was the main destination to and from where the routes went. He started with ladder cars with the need to replace the transfer of agricultural products between Sopetrán and Medellin, which for decades was carried out on a mule. With the passing of the years, it changed its name to Sotraurabá in 1964, a name that emerged and that still remains, because it was an important axis of local progress in the Urabá region, acquiring a social commitment to provide excellent service to the community.


Definitely, Sotrauraba was vital for the development of the region, transporting both the workers and the materials necessary for the construction of the bridge over the Cauca River, which facilitated the trip to Santa Fe de Antioquia. Subsequently, Sotrauraba, continued adding destinations to its portfolio, highlighting the Turbo route, thus being not only the first company to reach this place but the first Antioquia company that reached the sea. In the 80s, Sotraurabá moved its place of operations to the then newly opened Terminal del Norte de Medellin. 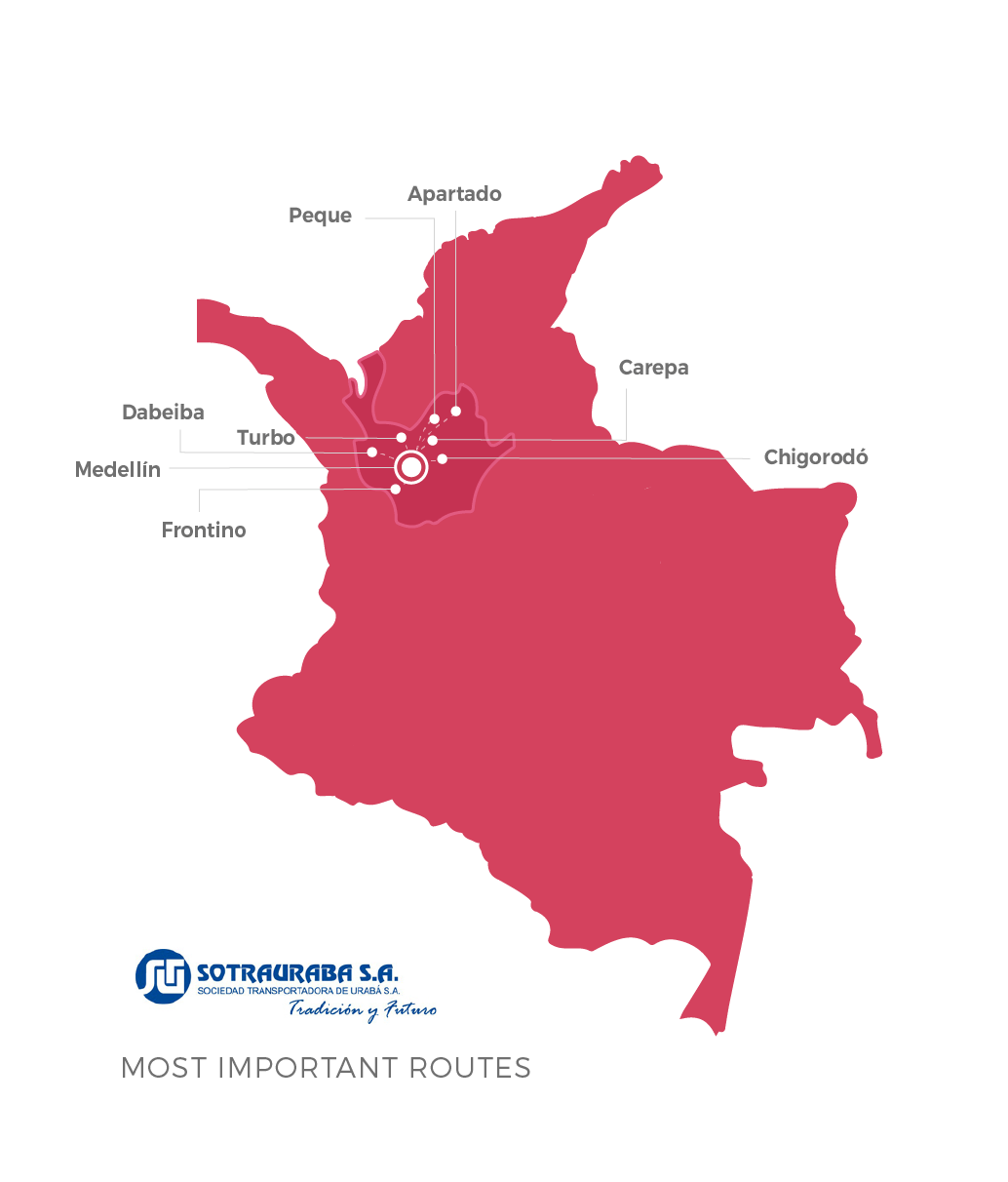 Sotrauraba`s Fleet is over 400 buses, all of them less than 5 years old to achieve travel safety and the trust of the more than 2 million passengers who travel with Sotrauraba annually. Currently, Sotraurabá is the leading company in inter-municipal public transport of passengers and parcels that communicate daily to Medellín with the Urabá and western Antioquia regions. The main destinations of Sotrauraba are Apartado, Buriticá, Dadeiba, Sabanalarga, and logically Medellin. Sotrauraba governs its internal policies, in accordance with the current regulations of the Ministry of Transport.

● Línea Occidente Premium: Service for the routes from Medellin to the westside of Antioquia, which has video screens, comfortable reclinable seats, Wifi, and a capacity of 35 to 40 passengers.


● Línea Light: Service with the capacity of 28 to 40 passengers that has air conditioning, Wifi, video screens, restrooms, and VIP seats on some vehicles.


● Línea Micro: Minibus services that can transport up to 19 passengers. It has Wifi, video screens, and air conditioning.


● Línea Express: Direct services of trucks and minivans that can transport up to 8 passengers, with air conditioning and Wifi.

Cancellations in Sotrauraba must be made up to 2 hours of the trip and a 0% penalty. For changes and postponements, check with the transport company.

Q: How much luggage can I take with me without paying extra?
A: The luggage you transport cannot exceed 15kg.
Q: I am not going to travel, how can I reschedule my trip or get a refund?
A: Cancel your tickets 2 hours in advance to be able to reschedule your ticket for a future date. There is no refund, but rescheduling has no additional cost to what you already paid.
Q: Does Sotrauraba offer discounts or promotions?
A: Minors between 8 and 14 years of age can travel on their own. For greater security, the company makes available the supervision of personnel during the journey. It should be borne in mind that this accompaniment service will not be provided to people with special conditions who need personalized attention. This service can be requested at the bus operator's ticket offices.
Q: Can I request a Private Service at Sotrauraba
A: In Sotrauraba you can book door-to-door services, with a previous reservation. The Express Uraba Line service operates in Medellin, Mutata, Chigorodo, Carepa, Apartado, Turbo and Necocli, while the Express Occidente Line provides its service in Medellin, Liborina, Frontino and Peque. For its part, the Express Suroeste Line covers Medellin and Tamesis.
Q: Can I travel with my pet?
A: To travel with your pet, it is important that it wears a diaper and a vaccination card. In Sotrauraba pets travel in the cellar in a rigid box of maximum 35cm high.
Q: What is the phone number of the company Sotrauraba?
A: The telephone number of the Company Sotrauraba is 444 5873
Q: What's the mail from Sotrauraba?
A: The e-mail of the Comany Sotrauraba is solicitudes@sotrauraba.com.co
Q: What is the total number of routes covered by Sotrauraba daily?
A: Sotrauraba covers 263 routes (approx.) daily.
Q: What is the total number of buses that have departures on company nights Sotrauraba?
A: There are 53 night bus departures for the company Sotrauraba.Should I print my bus ticket before boarding?
Q: Should I print my bus ticket before boarding?
A: Yes, you must print it before boarding, remember that all passengers will have to print their bus ticket that was sent to their email in PDF format and then be exchanged for a physical ticket at the counter of the bus company with which you are going to make the trip.
Q: Can I buy the ticket in someone else's name?
A: Yes. A person different from the one who is going to travel can buy the tickets online. The important thing is that the passenger's information is recorded in the document to be printed and delivered to the different ticket offices.

Buy your Sotrauraba bus tickets on the official website of redBus

As you purchase your Sotrauraba tickets, all you have to do is search for your route, select your seat and buy your ticket. It's that fast and simple! Now all customers of redBus Colombia can buy bus tickets from Sotrauraba safely by using a debit card, credit card, or any other mode of payment. In addition, all our customers can avail exclusive offers and promotions that are available on the redBus website.

Most Important Routes in Colombia