Expreso Brasilia Bus Service On Board

Cooperativa de Transportadores del Sur del Tolima COINTRASUR, is a passenger land transport company founded in the municipality of Chaparral, Tolima in 1964. Cointrasur has a group of people that is constantly trained to provide quality service and ensure the satisfaction of its clients. This commitment is not only with users, but also contributes strongly to the economic and business development of the region, generating more than 500 jobs directly. This has positioned Cointrasur as one of the best companies, not only in the south of Tolima, but in Colombia.


Cointrasur covers a huge number of routes inside the department of Tolima, as well as connecting to other regions of the country, mainly with those in the interior. Cointrasur’s fleet extends over 300 vehicles, distributed in buses, truks, vans, machetas, chivas and taxis. Cointrasur also provides the urban transport service in different municipalities in Tolima, as well as the cargo and parcel service. To this are added service stations in Ataco, Bogota, Chaparral, Espinal, Guamo, Ibague, Ortega, Planadas, Rioblanco and San Antonio. Additionally. Cointrasur also ventures into crane service and maintenance and spare parts for other vehicles.


Recently, Cointrasur has focused strongly on the development of good causes to collaborate with the less favored people of Chaparral and the rest of Tolima. Providing support to the elderly and assistance to disabled children. These actions contribute to the creation of community canteens and classrooms for formal and non-formal education, in addition to the constant improvement of tertiary roads. 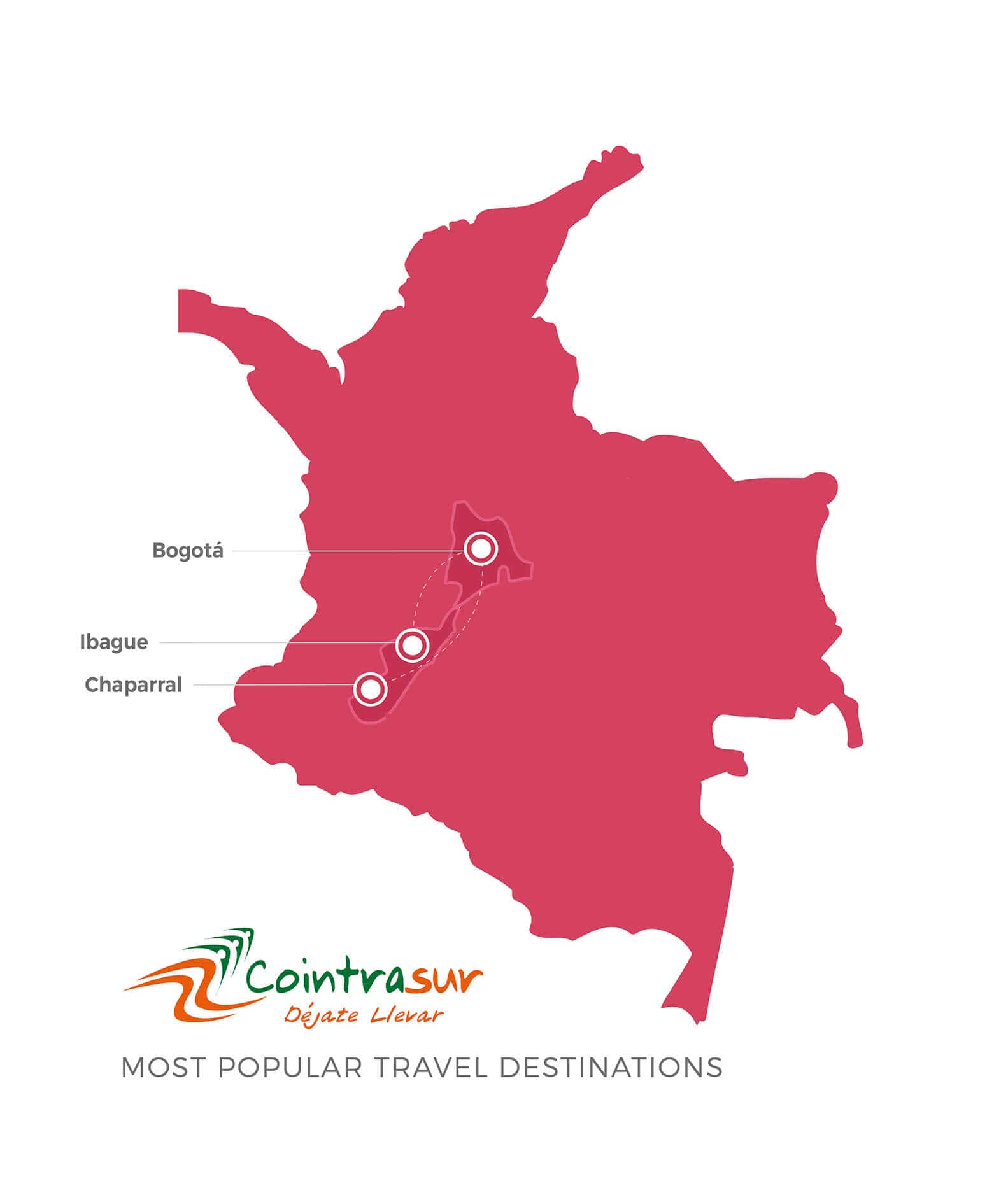 Cointrasur's onboard services include Comfortable chairs, air conditioning, wine cellar, music, Wi-Fi, and a cell phone charger, although the services vary from one model to another.

You can cancel your Cointrasur bus ticket until 6 hours before the trip. You cannot reschedule your ticket after the departure date. For more information about changes and reschedules, you can contact the bus company.

Q: I'm going to travel with a child, does she or he needs to have a ticket?
A: A child over 3 years old must pay the full ticket.
Q: Does cointrasur offer discounts or promotions?
A: You can consult the special discounts directly with the company.
Q: Can I request a Private Service at Cointrasur
A: In Cointrasur, in addition to the service of charges and incomes, you can request a special service.
Q: How much luggage can I take with me without paying extra?
A: 15 kg is the maximum weight allowed in each suitcase.
Q: What is the phone number of the company Cointrasur?
A: The phone number of Cointrasur is +57(8) 2460321
Q: I am not going to travel, how can I reschedule my trip or get a refund?
A: You can cancel your Cointrasur bus ticket until 6 hours before the trip. You cannot reschedule your ticket after the departure date. For more information about changes and reschedules, you can contact the bus company.